I’m in Bangkok this whole week for the Netccentric Regional Summit. You see every year our company holds a summit in January where the managers from our 7 countries in the region come together. In this one week period we share updates on how each country performed in the past year, share best practices and learnings. 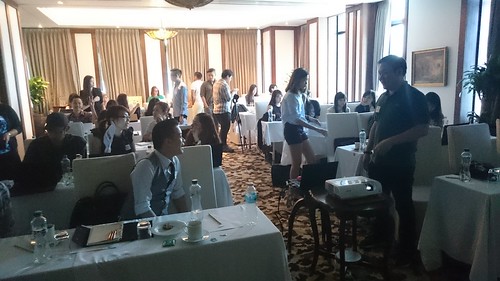 That used to be it. But as each year goes by we learn how to make the summit better and better. This year for example, instead of just sharing updates, the regional team plans out directives on what each country has to achieve in the coming quarters of the year. Everything is planned 2 quarters ahead.

It’s a really exciting time for us.
What’s different this year too is that we finally have a CEO.

Yep. Believe it or not, Netccentric never had a CEO or a managing director or a COO or anything like that. Ming and I never saw the need for such titles. Our name cards really just said Co-Founder and Executive Director.

That worked quite well for the past years but today the company has close to 200 employees or so and offices in 7 different countries. We were no longer a startup. The worst part was that because Ming and I were running half the companies each in our own ways, each country had different processes, goals, and strategies. Best practices weren’t shared too. We were like a boat where everybody was rowing in separate directions as opposed to one direction.

It took us a while, but Ming and I finally came to the realization that we had to consolidate. Netccentric and all its companies under it (Nuffnang, ChurpChurp, Reelity, Ripplewerkz, Dayre) would need to have one leader. One leader that would decide on the vision and strategy of the company.

I put my faith and confidence behind Ming. I asked him to be CEO. We made the announcement at the end of last year. Ming was to be CEO of the company, and me COO. Effectively making Ming my boss.

Before the announcement at the end of last year, Ming and I had already been privately playing those roles. He as CEO and me as COO. So we’ve already had a trial run and I can only say that I have never been happier and never been more confident of the future of the company.

I’m a good executor. I’m good at getting things done but I also tend to be really small picture. When a problem happens I go solve it immediately. Firefighting every day, like I’m a fireman.

Ming handles problems differently. He’s not interested in solving a problem once. He’s interested in finding the root of the problem and building a process to solve it forever. He has the ability to see things before they happen in business. When he knows what we need to do, he has the ability and resolve to really focus on what’s important and block out everything else.That’s the difference and that’s why I think he’ll make a great CEO.

We were blessed. Netccentric recorded really great growth last year and this year we’ve lots to look forward to. I’m really excited too for my change in role and our team and I can’t wait to achieve the things we have planned out this year.

Here’s some positive vibes to everyone in Netccentric, and everyone everywhere. May you all have a great year ahead!