I’ve made a lot of mistakes building the first Colony @ KLCC. Sure so far it’s looking like a commercial success but boy the list of things that I felt like I could have done better is long. An example would be our cafe area. I underestimated how full the cafe would get during lunch hour now that we’re at higher occupancy levels… and now the cafe gets so full, during lunch the team would sometimes just eat behind the reception.

There are some mistakes that I’ve made that are obvious and some that aren’t. The trick is trying to figure out the latter. So we relentlessly seek feedback from our guests and put them all in an action plan. Some of the things are small so it’s easy to fix, some.. not so small which made me ponder a little longer.

Here’s the story of one of those things that were expensive to fix but we did anyway.

One of the feedback we got from two of our shorter term guests was that the chairs in our reserved desk area were not ergonomic enough. Not comfortable. Here’s a picture of how the chairs were. 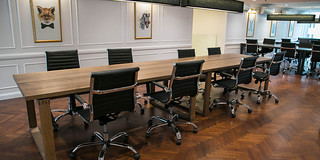 These chairs are common office meeting room chairs and they aren’t necessarily uncomfortable when used in meetings. But they’re not ergonomic too. I was really torn.

To make a decision I asked all our guests there about the chairs and 98% said they no problems with the chair. It was only with the 2%.

A part of me was tempted to just let it be then… and accept that I can’t satisfy everyone. Besides, the other piece of data I got was that our reserved desk area was operating at 100% occupancy. It was fully sold and we didn’t have anymore left to sell. So if it was already sold, and 98% of the people using it weren’t complaining… why change it?

One thing stopped me though, and that was acceptance of mediocrity.

I felt that if I start accepting that something less ideal was okay in Colony, where does it stop? Will we start to get complacent? Will we slack off in our standards?

So I went back to our mission as a company as a guide. Our mission is to empower life at work. To create the Ritz Carlton of the workspace.

What does that mean though? Well… in a good 5 star hotel, the bed is one of the most expensive parts of the room and it is so because it’s where a guest spends most of his time. What’s the bed equivalent of a coworking space? The chair.

We went out on a journey to seek the most ergonomic chair we could find. We tried so many and tried them over weeks until we found one that we really liked. It also happened to cost more than double than the first chairs.

When we found it, we decided to make it the standard chair for the new Colony locations too. So because we were ordering these chairs in such large quantities we could custom make it, even add our logo on the chairs. 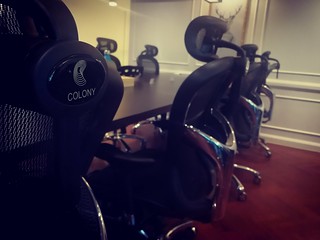 The new chairs arrived this week and the guests were all really excited. I watched as they adjusted headrest, armrest and the likes.

The response? They were all like “You guys didn’t have to la”… but were happy that we did.

I believe that just because a product sells well, doesn’t mean that we should stop improving it. In fact if we stop improving, then the only direction we can go is down. I found it helpful too to reflect on our mission as a company when it came to making business decisions.

Our focus is on the relentless approach to make sure our guests and/or customers are happy. Even if it takes investing more on an already fully sold product.