This time last year, I took this picture with Shorty at the site of what is now known as Colony @ KLCC. 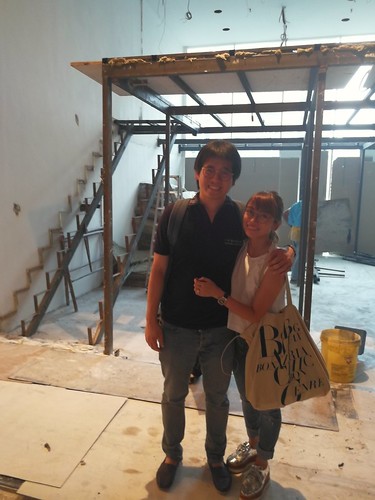 We had just signed the lease and immediately started work on renovations. If I told you how little we knew then about construction, renovations or even about running a coworking spaces, you may have been worried for me. Heck if you were an investor in Colony you might have had your doubts.

Both of us have been in advertising almost all our working lives. We’ve never ever had to build a project of this scale. Yet some 3 months after we started work we managed to complete it and shortly after launch Colony @ KLCC.

8 months later till today, we just announced that Cornerstone Partners, a company that owns hotels around the region just took a 10% stake in Colony at a US$15-20 million valuation, and our 8 month old startup has raised US$5 million to build more spaces. The best part… business is doing well. We’re firing on all metrics showing consistent growth each month in revenue and profits with March revenues and profits breaking a new record.

I’m not trying to be modest or anything but the truth is that I never expected we would make it this far this quickly. My sincere belief is that by some miracle, we made it in spite of what I am, instead of because of what I am. Perhaps the one thing that helped was openly admitting at an early stage that I really knew nothing and I needed all the help I could get.

So I constantly sought out help by hiring the right people, finding the right mentors and working with the right investors and landlords. Once I surrounded myself with these people I asked questions, and I listened. It didn’t matter if you were a small or larger investor in Colony, if you were an executive or manager in Colony, I wanted to know what you thought about a decision I was about to make. All the guidance I got and the blessing of having such an awesome team is what built this company today.

The truth is we’re still early days. There is still a very very long way to go. Our mission is to empower life at work. To change the experience of work as we know it and we can’t do that with just one location. We need more… and we want to do it not just in KL but all over South-East Asia. There are no short cuts here… I’m not about to take all this money we have now and simply open up Colonies everywhere.

I strongly believe that we have to get things right. That quality is better than quantity. Heck even today I still think we have a lot to work on when it comes to our service levels and hospitality but we’ll get there.

I guess the point of me writing this entry is to make a note in my blog. To remind myself that this is just the beginning, and I’m lucky to have made it this far so quick.

Thank you God for giving me this blessing.