I came into the world of luxury watches only in my second or third year of working. I had just earned my first small sum of money and was looking for something to spoil myself with. My friends at the time were all big on watches and told me I had to get one. They say a watch is the only accessory a man can buy (we don’t carry hand bags).

So what watch can I buy? I was recommended a Tag Heuer. A Tag I was told is like the BMW 3 series of luxury watches. It’s the entry level. It’s not the Maserati or the Porsche but it’s a nice watch. I went shopping and forked out about RM6,000 for my first Tag (after some discounts).

After the Tag, I heard of even more watches. The Rolex was the obvious one that stood out. Now every watch has a message that the wearer sends out right? So I asked of what message a Rolex sent and the common reply I got was “I’ve made it”. So when you wear a Rolex, you’re saying

Out of interest I started doing research on a lot of different watches. Rolex was nowhere close to the top. In the range of the Rolex there was Panerai, Hublot and many other similar watches that you can get for RM20-40K.

These luxury watches look absolutely beautiful and I can understand why people who want to have them just to have them. They’re a great piece of art and it takes a lot of work to make some of them. But there is a little more to that.

What does your watch say about you?

A watch tells people who you are and what you stand for but “success” doesn’t necessarily have to be the only message you send out. I heard this story of a judge in Singapore who always wore this cheap Casio watch. The message he sent out was

It’s just that somehow with the media portraying success as a very important thing, we all rally around trying to portray success by the things we carry. Guys do it with watches and cars. Women do it with bags and bling.

My father is a successful man in his mid-sixties who has spent the past 40 years of his life working to earn money. In his lifetime I’ve seen him buy and wear a wide range of luxury watches probably to send the same message that many of us young people long to send today. That we’re successful or we’ve made it. For my wedding present he gave me one of his old watches, something I keep with me and only wear on very special occasions. It’s a watch I will likely pass down to my son one day.

In our recent conversations he told me that he wanted to buy a new watch. I was thinking maybe an AP, Patek or something like that? But he said no. He wanted a SEIKO.

I was a little taken aback. Why would you want to buy a SEIKO when you have many other nicer watches to wear and his reply was “Why? It’s a nice watch”.

I then realize how clouded we sometimes get from all the advertising or branding that we get hit with. We often buy things because of the brand and fail to see that when something is nice… it is nice. Regardless of the label it carries.

So for his birthday present, my siblings and I went out to buy him a nice SEIKO. It cost RM1,580 after discount. 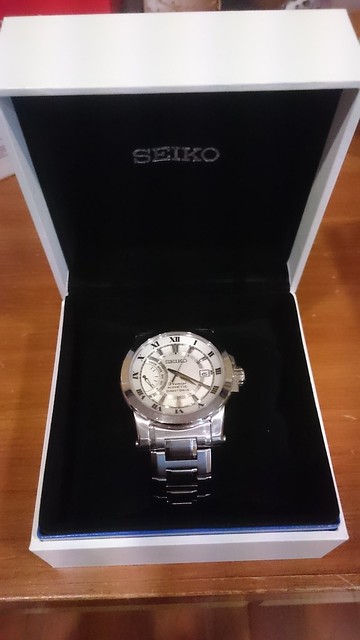 As I was buying the watch I remembered the things that my father told me about luxury watches from someone who has had many. He doesn’t want to wear them any more because he’s afraid he gets robbed (he specifically says he’s afraid his hand gets chopped off for it). He doesn’t want to wear them because he feels upset whenever he knocks it against something hard and damages it.

But most of all,  he doesn’t want to wear them any more because he doesn’t feel like he needs to prove anything to anyone any more.

That made me ponder today that maybe we don’t need luxury watches to send any messages. We can have them if we love them and they make us happy but we don’t need it as affirmation for who we stand for or what we are.

The message after all I was giving my Dad for that SEIKO was this: