While waiting for more pictures to come in from our proposal and before blogging about it we decided to blog about how we got together in our own respective point of views. This entry covers some really personal things about me and Shorty. We always made it a point not to put everything out online because we wanted to keep some of our relationship for ourselves… but this is a rare entry that I will share more.

I first met Shorty back in 2008. Su Ann, Kenny and Wen-Qi wanted to bring me out for a small birthday tea time think at The Banquet in Bangsar Village so I went along. 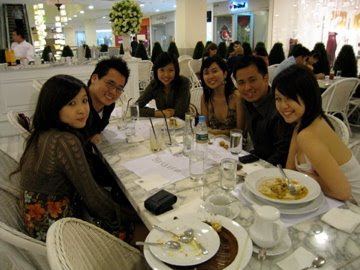 Over there we bumped into Shorty having tea with a couple of her friends. My first thought when I first saw Shorty
“That’s gotta be a new record of short-ness in a dress”.

She was wearing this yellow dress that was so short it barely covered anything. I later learned that the dress wasn’t really a dress but more like a top that Shorty was wearing as a dress…. and she had really short shorts under it.

Shorty and I didn’t know each other then… but we knew OF each other. She knew that I had started a small internet company called Nuffnang and I knew that she was a pretty well known blogger who used her height as her blog URL. We talked a little and I learned that just being freshly back from the US, she was looking for a job in the advertising industry. So I promised to help and we exchanged e-mail and MSN contact. We didn’t even exchange phone numbers.

After that first time we met, we never saw each other again for a while though we did keep in touch over MSN.  Shorty had a boyfriend at that time and I was with a wonderful girl then named Wen-Qi. In the next few months though our relationships ended. Shorty broke up with her boyfriend and Wen-Qi and I broke up when she left for Singapore to study music.

As time passed, our MSN conversations turned out to be quite something. Shorty and I would make each other laugh over MSN every day. She was really smart, witty and had this confidence about her that she wasn’t afraid to make fun of herself whether it’s her height or her absent-mindedness. Eventually we got together one day. It wasn’t like a “Will you be my girlfriend?” or anything like that. It was somehow like a mutual understanding that we were both together. I was 24 and she was 23 though, so we weren’t looking for anything really serious (definitely not marriage)… just having a little bit of fun from our companionship. 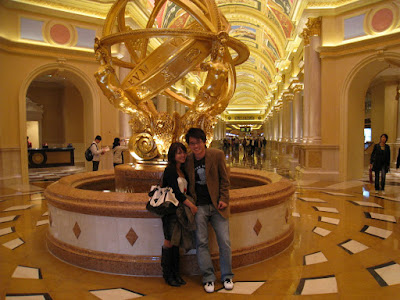 3 years later we find ourselves still together which is an achievement for us both because I tend to have a relatively short attention-span when it comes to relationships and Shorty says she always gets dumped. We were lucky. I think for us, our honeymoon period lasted for a year (eventhough it didn’t feel like it). It was only after a year had passed that we knew we were going into the ‘comfort-zone’ of a relationship phase but somehow….. we still made each other really happy. We would still make each other laugh every day… and on days where either one of us had problems, we would sit down together to talk about it. Talking to her about my problems always made me feel better. 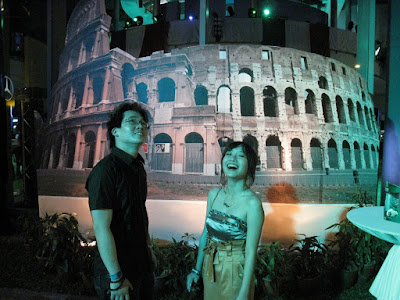 As attached to we are to each other, ironically we’re also quite independent. Whenever I go home to Penang for a few days or go overseas for a business trip we don’t always find the need to call each other before we sleep. Once in a while we would make a call to each other but when I do come home we would sit down and do nothing but talk about what happened in those past few days.

It’s not like we never had problems though. We had many… and many of them were common problems other relationships had. Like we would argue because I would feel I do a lot for her but she didn’t do enough back for me. Over time though we naturally learned to bridge these differences. I would learn to bring down my expectations and she would learn to try to do more. Today, we still have some of these problems but we have somehow learned to accept them.

Shorty and I had a kind of relationship that I had never experienced before. We somehow really understood each other.

Marriage on the other hand was something I had always been terrified of. My married friends always told me to stay away from marriage and enjoy single-hood.
They told me two things:

1) As a guy, the older you get… the more options you have.

I found the first point a little true. In university, I wasn’t very popular among the ladies. But as I grew older and somehow a little more matured (eventhough there’s still a little boy in me), things got easier. Girls who were my age were all looking to find “the one” and get married so they would make a little more effort to get to know a guy… and then of course you have girls a few years your junior who were always looking for someone a little bit older.

For the second point though I realized I could never know what to expect. I’ve seen a number of my friends already end in divorce and those we weren’t in divorce yet were complaining about their wives/marriages etc etc. I knew I should get married sooner or later though… I just didn’t want to yet.

One day I realized something. A fortune teller once told me that I would always have to take care of my wife. I’m not sure what that really meant but it apparently could be interpreted as that my wife would always fall sick and all that. I thought about it and yes I can imagine it. Shorty’s the kind who’s really weak and always falls sick. When I thought about her being sick I realized that if she were one day sick, I would want to be the one to take care of her. Not have anyone else but me.  That’s when I knew…. she was the one.

So last week on the 30th of November… I proposed.

PS: Here’s something I just learned last night. While Audrey grew up in Subang and I grew up in Penang, we were both actually born in the same hospital in Penang and delivered by the very same doctor.

I will save the proposal for the next entry 🙂

You can read Shorty’s point of view here.